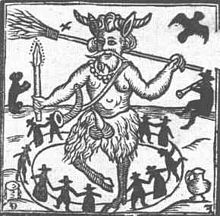 (I am reviewing individual perfume modifications or sketches as "desk crits", based on my experience of how architectural projects are critiqued during the design phase.  When all of the perfumes are in, I will do a "final review", again modeled on the way architectural projects are reviewed as a whole.)
There is something “Puck-ish” about the *fragrances Amanda Feeley has created for the DevilScent project.  Puck is the mischievous trickster and nature sprite who appears when you speak of the Devil.  He’s also known as Robin Goodfellow or Hobgoblin (derived from Robin) and other variations.  As a literary character he makes his appearance in Faust’s “A Walpurgisnacht Traum” but is best known for his role in Shakespeare’s “A Midsummer Night’s Dream”.
Puck seems close to Amanda’s heart, imbuing her work with knavish delight and whimsy.  After all, it was Ms. Feeley who organized, or should I say, orchestrated last summer’s “A Midsummer-Night’s Dream”, an ambitious project involving 16 perfumers and 11 bloggers that owed as much to Mendelssohn’s symphony as it did to the play.  Ms. Feeley created two perfumes for that event:  Pixie Dust and Bottom’s Dream, the former smelling of the forest, the latter of peach (“Do I dare eat a peach” The Love Song of J. Alfred Prufrock).
Her perfume modifications for the Devilscent project are three interpretations of a Puck-like devil who inhabits the forest.  All three versions share the same labdanum bed to a varying degree. Devil #1 has a fir balsam note layered onto labdanum that’s paired with a vaguely minty top.  Wormwood (Artemisia absinthium) comes to mind which wouldn’t surprise me since Ms. Feeley’s handle online is the "Absinthe Dragonfly".  All of the plants in the Artemisia family dwell in the wild and pay heed only to their hunter goddess, Artemis.  Devil #3, on the other hand digs underground and is noticeably earthier, muskier, possibly due to a liberal addition of angelica root, perhaps intended as a symbol for a fallen angel?
While Devil #1 and #3 share similarities and arrived on my doorstep in the same bag, Devil #2 was alone in his own bag and when I smelled him, I could understand why.  It was clear this little guy was not willing to share the stage with the others.  He had also sneaked out of the vial and had smeared the label.  Ahhh, calamus root (Acorus calamus).  But why this botanical?  I went back and discovered that the rhizome of this grass (also known as sweet flag or sweet grass) was thought to be an aphrodisiac and was possibly one of the ingredients used to make absinthe (the green fairy again).  To further support the aphrodisiac claim given to calamus, it appears as though Walt Whitman added a section to the third edition of his “Leaves of Grass” calling it “Calamus” where references to the plant were symbols of love and lust, the Devil’s calling card.
The etymology of calamus reveals that it comes from the Sanskrit word “kalama” which in Farsi (Indo-European language) has two meanings.  It can mean either word (kalameh) or pen (qalam) pronounced with the gutteral qu’ain and related to the reed pens used in calligraphy that were made from a special hollow grass (probably calamus).  Of course, the reed is also used for certain wind instruments, like the oboe or pan-flute that would have been played by our mischievous Puck as he would lead folks astray in his woodland domain.
While Devil#1 and #3 are interesting compositions, #2 captures the trickster embodied by Sheila Eggenberger's Dev, but more importantly, it lies at the heart of Amanda’s quixotic work.  This is the scent I imagine Stanley Tucci’s wry and satirical Puck would have, a trickster after my own (naturally) perfumed heart! 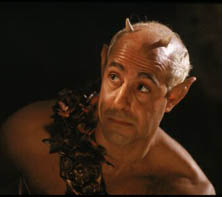 *Ms. Feeley works only with natural and botanical essences.

Posted by Maggie Mahboubian at 3:02 PM

What a fun romp through these Devilscent Variations! I do feel a companionship with Puck, frolicky and foresty. I secretly wish I was forest creature from time to time :D

Number two is the sneakiest Devil, and the one that seems to elicit a strong emotional response with everyone who sniffs him.

Thanks for your review!

It's a blast getting to know you this way through your perfumes. Seeing as we share other circles, hopefully we'll meet in person someday.

I love how you combine architectural criticism with perfume, Maggie, it's fascinating. That #2 sounds like quite the character!

Thanks for your kind words, Dionne. To quote my architecture professor of MANY years ago (24 to be exact), Rafael Moneo, I love working with "so great freedom". There are so many ideas to explore and synthesize. It's really very exciting for me!

It's really fun to get to know people through their creations! Someday I'm going to make a scented journey to meet all of the wonderful people I've gotten to know online.

It will be my perfume pilgrimage! :D