When one thinks of perfume, instinctively commercial brands come to mind.  However, the perfume world has changed dramatically the last few years facilitated by social media sites that have made it possible for enthusiasts to exchange ideas directly and create virtual communities.  It is here that one can gain exposure to other types of perfumes such as niche, natural, experimental, conceptual, vintage or art fragrances.  It is here that one can meet and converse not only with fellow perfumistas, but with bloggers, critics, writers, sellers, buyers, aromatic producers, manufacturers, historians, curators and even perfumers.  Because of this connectivity it is now possible to stay on top of things regardless of where one lives.  The fragrance world is no longer a centralized hegemony, but an individualized paradigm within the context of a raw democracy.
It was through this venue that I was able to meet Sheila Eggenberger, read her Quantum Demonology novel and take part in the DevilScent project as a blogger.  It was this context where Sheila met Ellen Covey, a perfumer (owner of Olympic Orchards) and partner in crime.  Since Ellen started the DevilScent project with Sheila her Dev variations are not just interpretations of the Devil’s fragrance but four archetypal aspects of that entity.  Together they are the perfume equivalent of the character Sheila Eggenberger created.  Dark, bitter, rich, spicy, earthy, fiery and cognac smooth. They can be experienced as stand alone fragrances, form a transition from one state to another or be layered for a devilish rush.
Dev 1 and 4, Alpha and Omega, beginning and end share a note that I can only describe as lacquer.  An opulent dark lacquer adding luster to the surface of rich wood and fine art.  From the moment I smelled these perfumes I had a flashback to when I would accompany my parents to the bazaar in Tehran where they would take their antique furniture to be refinished.

The workshop was medieval at best, a dark, crepuscular space with furniture piled haphazardly, cans of lacquer and shellac, waxes, oils and stained rags strewn about.  There was a haze of wood dust and cigarette smoke that never seemed to settle down.  The walls were damp with patches of swelling plaster and yellowed paint.  A skylight punctuated the end of the space where a crouched figure worked, the odor of his sweat a reminder of the heat outside.  Mingled together was the smell of wood; fresh, aromatic and exotic.
But Dev 1 and 4 also reminded me of something else which I finally identified when I recently pulled out samples of Nootka and Giant Arborvitae I purchased from a Canadian company that produces these oils sustainably from leftover sawdust.  It is rare to find an essential oil that has longevity, lift and sillage, but Giant Arborvitae is just such a gem.  True to its name though, it is a giant that can squelch practically everything in its path and is very difficult to tame.  The beauty of Dev 1 and 4 are that Ellen Covey has not tried to tame the giant, recognizing instead, the power of this aromatic and has paired it with other strong notes to create an untamed fragrance that unleashes memory and desire.
Giant Arborvitae (Thuja plicata) is a wild and ancient tree, a cypress native to North America and intrinsic to the lives of the indigenous people of the Pacific Northwest.  All parts of the tree were used to create canoes, housing, clothing, baskets, fishing poles, utensils and totem poles.  Arborvitae means “tree of life” and specimens can live for hundreds of years.  Using the oil from this tree can certainly invoke its spirit (benevolent or mischievous) which comes to life on the skin.
Dev 2 and 3 are bridge fragrances that swing in different directions.  Dev 2 has a sweet sexiness in its depth.  But Dev 3 is crazy spicy and takes me down yet another memory lane to the same bazaar where my mother would buy her medicinal herbs and culinary spices.  This was a very different space, that of a peaceful and somewhat rotund Hajji who sat behind his counter surrounded by jars, amphorae and baskets of herbs.  He would dutifully mete out the contents of a vessel onto a scale using brass weights for balance and then pack everything in brown paper bags and calculate the cost with a well-worn abacus.
I asked my mother to try Dev 3 and tell me what it brought to mind.  She immediately remembered the spice shop and its smells as well as the woody lacquer note.  How Ellen could have created fragrances that bring to mind the same distant memories for my mother and myself is amazing.  Such is the skill of a talented perfumer who can harness the mystery of fragrance.
Ellen Covey’s Dev quartet are not easy fragrances with mass appeal like most commercial perfumes marketed today (witness Justin Bieber). The Dev series are conceptual explorations along the lines of a John Cage composition for the prepared piano.  Working with a difficult aromatic is analogous to rigging up an instrument so that the sounds produced are no longer familiar but new and evocative.  Once the ear grows accustomed to this new terrain, it’s hard to go back to the familiar, classically composed instrument.  Similarly, once the nose grows accustomed to unconventional scents, it’s hard to wear a classically composed fragrance the same way.  Conceptual explorations cause a shift to occur, a change of perspective, a door to open onto an unknown space.
Conceptual perfumery can hardly be considered a fragrance category (yet), let alone one intended for commercial success, there are so few perfumers who have gone out on that limb, but it is an exciting area of exploration that has the potential to push the boundaries of the medium.  Thanks to the online community, there also seems to be an interest in perfumes that buck convention.  Hopefully, the day will come when our collective perfume horizons will be expanded beyond the veil that stands between fragrance and art. 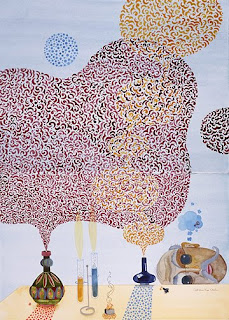 More than the casual spritz, I argue that fragrance appreciation is something we can all enjoy!  Read about it on Cafleurbon:


What makes the Faustian tale so compelling?  Is it the promise of worldliness?  Getting what we want?  The thrill of flirting with danger?  Perhaps the first tale of its kind was the Adam and Eve story, where they tasted of the tree of knowledge and their eyes were opened.  There’s always a price to pay when dealing with the devil and theirs was being cast out of Eden and thrust into the world. 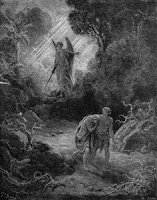 The memory of their original home and past innocence attained mythic proportions and as a result God, their creator, became the gatekeeper of their past.  Somebody else had to step up to the plate and provide the tools for their survival and success in the wilderness.  That was the Devil who offered ambition and drive (along with seven other deadly sins) so that future generations could enjoy the fruits of culture and sophistication.

Alexis Karl and Maria McElroy of Cherry Bomb Killer Perfume, have delved deep into the myth and mystique of the devil.  Inspired by the characters in Sheila Eggenberger’s Quantum Demonology novel and their own dark-themed work, these mistresses of the subconscious have collaborated on the creation of two fragrances for the Devilscent project: Dev and Lil.  Although named after the Devil and his wife Lilith, these perfumes also exemplify Adam and Eve after their expulsion from paradise. The ousted couple, residing now in New York City (like their mistress perfumers), prefer the shelter of the night to the shining light of day, and never leave their apartment without perfume.

Smoldering caramel, burnt sugar, molasses and maple, Dev is the ultimate gourmand fragrance because it conveys the original meaning of the French term: that of gluttony.  Catching a whiff is not enough.  One needs draughts of the stuff, inhaling deeply and coming back for more.  It’s thick enough to eat and can cause Americans to spontaneously erupt in French “c’est si bon!” (thanks Yoplait).  It’s a decadent olfactory dessert and if worn on the right man could make a woman skip that course and head straight for the sheets.  This perfume would have made Adam’s first wife Lilith submit to his demands so that God wouldn’t have to fashion another mate from his rib (ouch!).  It is domination in a “Venus in Furs” kind of way, where pleasure and pain are exchanged freely. 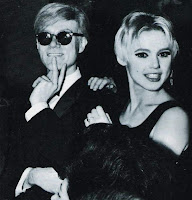 Lil, on the other hand, is “Femme Fatale”, sung to perfection by Nico with her throaty voice recalling Edie Sedgewick, muse to Andy Warhol at the Factory.  One tragic superstar glamazon singing about another.  However, beneath her charming gamine exterior and celebutante background Edie, like Lil and even Nico is “from the street, She’s just a little tease (She’s a femme fatale), See the way she walks, Hear the way she talks, She’s gonna play you for a fool yes it’s true”.  Alexis and Maria’s creations are avant garde perfume covers of these two songs that live side-by-side on the Velvet Underground & Nico album.  They are rock perfumes that deal with the dark veins running beneath the surface of sweetness and beauty.

There is another musical connection through Alexis Karl who, in addition to being a talented perfumer, is a trained opera singer and visual artist.  She performs her musical compositions with her band “Ondyne’s Demise”, her voice capturing the gloaming dreamscape of the subconscious and transporting us through the gothic atmosphere of danger and mystery.  While the Velvet Underground lyrics conjure up archetypal anima/animus images of Dev and Lil, Adam and Eve, Andy and Edie, Lou and Nico . . . the smoky sounds of Ondine’s Demise provide the backdrop for all of these Faustian arrangements.  Is this particular melding of perfume and music inspired by the devil himself?  Perhaps, but I doubt these Maitresses Parfumeuses will ever divulge their secrets!


Posted by Maggie Mahboubian at 7:06 AM No comments: