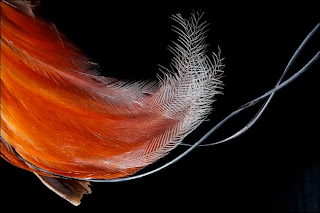 (I am reviewing individual perfume modifications or sketches as "desk crits", based on my experience of how architectural projects are critiqued during the design phase.  When all of the perfumes are in, I will do a "final review", again modeled on the way architectural projects are reviewed as a whole.)
My initial reaction to Neil Morris’ Dev#2 was:  “Well, knock me down with a feather . . . preferably one that comes from a fallen angel . . . and reel me in with sexy cumin”.  Mind you, this is not Le Labo’s Rose 31 version of cumin, but a gorgeously bitter and fermented concoction with notes of wine soaked raisin/date/nut meat like the haroseth prepared for a Persian seder with smokey pepper thrown in.
To my nose Neil’s creation has the same elements as *Kyphi, the sacred Egyptian incense made with wine, dates and raisins which most likely contained labdanum, another mainstay of the ancient world.  Like an artifact from antiquity, Neil’s Dev#2 has an abstract quality. It is, indeed, an incense type fragrance, but deconstructed.  One that can be reduced to the abstract interplay of its two main components, cumin and cistus, notes that have been structured in a way that defy a homogeneous cultural reading.  Cumin and cistus act as signifiers that identify a heterogeneous concept of the signified (incense).
Deconstruction in architecture, unlike Jacques Derrida’s practice of analyzing texts to reveal ambiguities of intention, became a means of overlaying a (sometimes arbitrary) system of generating form which would not be referable to any cultural or historical language.  It attempted to create an anti-symbolic method of designing buildings, but was ultimately flawed and contradictory because nothing can ever be reduced to a non-symbolic form so as to be read and understood by everyone.  There’s always a layer of cultural meaning that seeps in to muddy the waters.  And that muddiness and ambiguity is what becomes interesting anyway.
Deconstruction in perfumery however, could be more fruitful and less polemic, both in terms of creation and analysis.  I sense that Neil Morris is already working within the parameters of ambiguity, especially through his “Vault” line (http://www.neilmorrisfragrances.com/vault.html), if Dev#2 is any indication.  As an independent perfumer, he is free to explore concepts and fragrance combinations that commercial perfumers could never touch.  The fragrances he offers are part of an oeuvre, or life work that describe his trajectory of exploration.  I also sense that he is a minimalist, preferring to pare down his perfumes while allowing them some muddiness.  Dev#2 is wearable but certainly not conventional.  I would contend that Neil Morris has nailed it with this modification he sent me as his interpretation of the devil’s scent in Sheila Eggenberger’s novel Quantum Demonology.

*I have a theory that the haroseth prepared during Passover is a Jewish interpretation of kyphi and may have initially been an incense which was eventually transformed into one of the edible, symbolic elements of the seder table.

Image:  Red Bird of Paradise Feather from the Institute of Zoology and Zoological Museum, University of Hamburg
Posted by Maggie Mahboubian at 1:15 PM

Maggie, thank you so much for taking the time to write about my Dev #2! I love your comparisons between perfume and architecture!And your observation that as an Indie perfumer I can take risks that commercial perfumers wouldn't dream of is spot on! "Wearable but not conventional" - if that's the case then I have succeeded. Thanks again, Maggie!

I am so grateful to have had your implicit trust in writing about your perfume, because I'm relatively new to the world of critiquing perfumes and the only way I know how is through my architectural lens. It's a work in progress . . .

Can't wait to get to Takashimaya!