In Part 1 I critiqued how contemporary perfumery had commercialized the public realm with a battery of strong scents analogous to olfactory billboards, each vying to grab our attention. This widespread and “loud” use of perfumes in so many products has reversed what was once the traditional use perfume; as a way to draw us into the private realm of the individual. Instead, we have become (sometimes unwilling) participants in the private lives of the people we encounter throughout the day and have lost touch with the scent environments of our natural world.

Yet, I still love perfume. I enjoy the feelings they evoke, the memories they conjure and the beauty they offer. A world without perfume would quickly become boring and flat. Perfumes are virtually universal and timeless in their appreciation as they speak of culture. The ancients were crazy about them. Witness countless images of Roman ladies holding perfume bottles, Egyptians carrying perfumed cones on their heads, and exotic resins traveling the silk road. Perfume has been written into our sacred texts and even uncovered in tombs. There isn’t a culture that doesn’t have some form of scented experience. It is intrinsic to our human experience, and distinguishes us from animals but also ties us inextricably to the natural world. After all, our receptors register the same odor molecules that bees and other insects detect in flowers. If our noses only functioned to help us differentiate dangerous odors from benign, why would we have evolved such complex mechanisms to smell something as “superfluous” as a flower? It is this phenomena that compels us to create naturally derived aromatics. They connect us to the private life of the natural world where scent plays a major role in the complex dance between plants and animals.

A renaissance is taking place in perfumery that extends back to the ancient practice of using aromatics derived from plants and animal sources to create fragrant compositions. For lack of a better term, it has come to be known as “natural perfumery”. Others call it “traditional” or “botanical” perfumery, but what it refers to is the use of naturally or traditionally derived essences to create perfumes. It eschews the use of synthetically derived aroma chemicals and additives. However, instead of looking backwards nostalgically, natural perfumery has embraced the multitude of new extraction techniques and novel essences that have expanded the palette from some 200 notes to well over 600. It has also revived an interest in traditional extraction methods that have existed for thousands of years, such as the production of attars and is protecting these art forms from being lost.

Although natural aromatics were used exclusively up until the end of the 18th century when synthetic compounds such as vanillin were discovered, the commercial perfume world has reacted harshly to the efforts of natural perfumers. They have gone so far as to say that it isn’t possible to create a perfume with naturals because they diffuse too quickly, have limited longevity, don’t have enough lift or sillage, vary from batch to batch and end up muddy. Really?

Most natural perfumes are structured on the diffusivity of the essences used in a composition. Top notes are essences that dry down and disappear within an hour, heart notes are those that last for 2-3 hours and base notes linger for 3-4 hours or more. As a result, natural perfumes change as they dry down since they do not contain fixatives to prevent top notes from dissipating or chemicals to help give them lift and sillage. The dry down allows for interesting structures to emerge as the wearer discovers new layers that reveal themselves over time. It’s a very different experience from the primarily linear structure of contemporary perfumes. Contemporary perfumes tend to smell pretty much the same when first applied as they do by the end of the day. A natural perfume evolves over time and has to smell appealing through all of its dry-down phases, not just hold together as a composition.

The limited longevity of natural perfumes has been a subject of considerable debate and criticism. Why create a perfume if it’s only going to last for a few hours? Traditionally, perfumes were not only enjoyed on the body but also on handkerchiefs and gloves. The reason for this was the limited life of traditional perfumes on the skin. No one really knows why, but skin type and metabolism seem to be factors in how long a natural perfume will last. Dry skin tends to absorb scent molecules faster than oily skin. Warm skin diffuses scent better than cool. However, the same perfumes remain relatively “fixed” when applied to fabric or gloves. One could reach for a “mouchoir” and enjoy a perfume anytime without fatiguing ones olfactory receptors.

But there’s another argument in favor of perfumes with limited longevity and it has to do with how the nose perceives scent. In the morning, the nose is rested from it’s temporary paralysis of anosmic sleep and is most receptive to fresh, bright odors. By afternoon, the earlier hours of stimulation have somewhat desensitized the nose, so richer scents are needed. In the evening, the nose prefers the heavier scents typically associated with going out on the town. Natural perfumes lend themselves to this daily evolution of the nose. One can wear a citrus based cologne in the morning, a balsamic floral in the afternoon and a heavy oriental in the evening without fear of overlapping or muddling one’s perfumes. 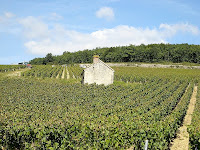 Botanical extractions used in a natural perfume can vary fromseason to season and are dependent on the terroir or region where they are grown. Like wines, aromatic extractions can have “vintages” and some years may be better than others. Some extractions age well, while others oxidize quickly and this has to be taken into consideration when blending as no preservatives are added to natural perfumes. As a result, a natural perfume may not always smell exactly the same from batch to batch, unlike synthetic perfumes where many of the ingredients are created in a controlled environment so that a perfume will always smell the same. In effect, each natural perfume batch becomes a “limited edition” that is dependent on the subtle nuances offered by the elements used. These nuances may not always be perceptible to most. Like wine, variability in perfume editions can offer alternative dimensions that can be explored and savored. Each bottle of natural perfume is a unique entity. This differs greatly from the concept of mass-produced objects and is accepted for most artisanally produced items such as wine or cheese. So why not perfumes? After all, our sense of taste is wholly dependent on our nose, so why not view perfumes as an extension of our palate? That way a wearer can develop an expanded vocabulary of scent variability and, like a gourmet, be able to appreciate the subtle complexities, differences and finitude of a particular scent from edition to edition.

Botanical extractions used in natural perfumery are complex entities often containing hundreds of naturally occurring chemical constituents. Synthetic perfumes, on the other hand are made with mostly individual chemical constituents that have to be blended into complicated formulas in order to approach the equivalent of a natural. Many botanical extractions are already “rounded out” with their own top, middle and base notes and can be viewed as complete perfumes in and of themselves. Such is the case with attars that are by made by steam distilling a single aromatic into sandalwood essential oil. Two constituents, yet deliciously intricate. 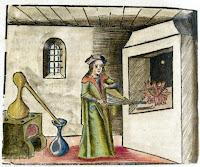 Blending naturals can be challenging as not all notes like to play well together. In addition, blends have to marry for a couple of months before they can be evaluated. A natural perfumer learns through experience which elements work together harmoniously, but after that it is up to the chemical reactions that take place in the bottle. There is an element of alchemy involved in this process that makes working with naturals so exciting, mysterious and unpredictable. Blends that start out coherent on the scent strip can end up muddy and those that smell off can end up brilliant. Simple combinations can end up better than elaborate formulas. So far, no one has quantified the process of creating natural perfumes, but why tamper with this inherent complexity and contradiction? Natural perfumery requires circular thinking and the willingness to work with variability, failure and change. It is the antithesis of structured linear thought associated with a scientific approach. A natural perfumer does not seek to tame or master his medium but rather strike a balance between the desires of the will and the outcome of circumstance.

Commercial and natural perfumes differ greatly from one another. One dominates the public realm while the other defines the private. One clings to the body while the other transforms it. One sparkles with the virtuosity of our scientific age while the other speaks of fragility, subtlety, nuance and changeability. One is made by a chemist, the other an alchemist. 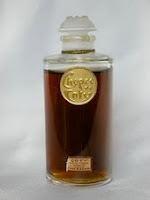 Older commercial perfumes used higher percentages of natural ingredients in their blends. Many were eventually reformulated in the 1980‘s with synthetics because of skyrocketing costs, seasonal variability, discontinued ingredients, crop failure and even political unrest affecting the availability of natural ingredients. Cheaper and easier to obtain synthetic substitutes were no longer dependent on the vagaries of life. Recently, many of these classic perfumes have been reformulated again to satisfy the stringent requirements of IFRA. The result has changed the world of commercial perfumery to the extent that some scents are almost unrecognizable from their originals. When Luca Turin waxes poetic over the original version of a particular perfume, I can’t help but think the difference has to do with the naturals in the juice. But I also think about the history of older perfumes and how they captured a moment in time that can never be recreated. To me, that is art.

Posted by Maggie Mahboubian at 2:02 AM 9 comments: