Contemporary perfumes have become increasingly noticable in the public realm. Some are so strong that they are able to broadcast an individual upon entering a room. Others create a cloud-like aura that hovers throughout the day. They even leave their imprint in elevators, subways and office cubicles. Through the use of chemical extenders that emanate scent creating lift and sillage, fixatives that allow perfumes to last longer, and a palette of strong aromachemicals the modern perfumer appears to have unwittingly unleashed a chemical assault on the public. This has not gone unnoticed. 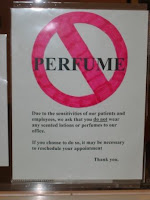 The prevalence of strong perfumes has sparked a backlash. Many doctors have posted signs asking people to be considerate of others and not wear scent. There are even medical procedures, such as embryo transfers where patients are asked not to use scented soaps or body washes as the odor molecules can interfere with the early stages of embryo development and cause potential chromosomal damage during transfer from petri dish to an expectant mother’s womb. Recently, the city of Detroit created fragrance-free zones in its city buildings after one of it’s employees claimed a co-worker’s perfume caused breathing problems and was awarded $100,000 by the U.S. District Court under the Americans with Disabilities Act. Finally, there are anti-fragrance campaigns that seek to ban perfumes and other synthetic smells altogether from public places.

Indeed, perfumes have become so ubiquitous that they can be found in just about everything we use. A sample inventory of scented personal care products will include: shampoos, conditioners, hair creams, gels, sprays, soaps, body washes, treatment scrubs, face cream, cleansers, toners, body lotions, eye creams, hand creams, foot creams, cuticle removers, hair removers, shaving creams, underarm deodorants, full body deodorants, perfumes, colognes, after shaves, soothing balms, toothpastes, mouthwashes and even dental floss. Almost every personal care product we use has some form of (usually synthetic) scent or flavoring. Our cleaning products are also heavily perfumed. They include household cleaners, deodorizers, scent neutralizers, detergents, solvents, and conditioners that add up to a relentless battery of smells that can not only assault the senses but can also lead to chemical sensitivities.

And as if that weren’t enough, there are architects and perfumers (Christophe Laudamiel) who are enamored with the idea of environmental smells that go beyond room fresheners or deodorizers. They seek to create scent environments and even an opera! In a recent one-day symposium held at the Parsons School of Design architects and perfumers gathered to discuss how scent could become the new territory for design. “Scent is a tool for architects and designers that should be exploited more,” quoted Paola Antonelli, the organizer for HEADSPACE 2010. 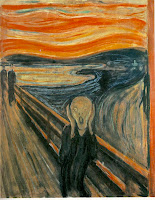 While it is interesting to conceptualize how scent can become a more proactive participant in the built environment, it’s worthy to note that contemporary perfumes have already exploited the most public domain of our cultural milieu, that of advertising our sexuality. Wearers have become olfactory billboards for perfumers where each is trying to scream over the din of the others below. These perfume screams have gotten so loud that perfumers themselves are reacting by marketing the “anti-perfume” popularized by Rei Kawakubo of Commes des Garcons or the “non-perfume” such as LolaVie, Jennifer Anniston’s soon to be launched perfume. 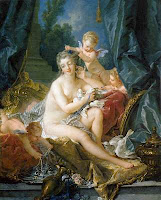 What has all this done to the private realm of scent; the mysterious aura of the individual, the carnal knowledge of the nose? For one, it has reversed our notions of public and private so that the smells of the bedroom can now be found in the boardroom (and everywhere else). We have become unconditional participants in the erogenous lives of others. Ironically, by thrusting out the scent of the individual and saturating the environment with aroma chemicals each of us has lost the breathing room of the self we once enjoyed. We’ve lost the room to explore our own odors, the odors of others and the smells of the natural world. In many ways I believe this is in response to the sensory deprivation that has become endemic to modern living. We use smell to recreate a world that doesn’t really exist. Perfume has become a substitute for living in the natural world where our senses were stimulated by the odors of our own bodies and our surroundings. Throughout history scent has been used to mask putrid odors, but our culture seems to be waging a war against natural smells. We wear our perfumes like armored vehicles, intent upon protecting ourselves from the terrain of natural smells. 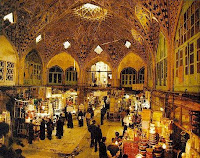 I grew up in Iran where strong smells were inescapable: infrequently washed bodies, breath pungeant with raw onion and bazaar floors wet with animal feces, blood and urine. By contrast, there was the smell of fruit: peaches, cucumbers, melons and flowers like roses, jasmine and orange blossoms that were intensified by the arid climate. The smell of dust settling as gardens were watered in the evening and the occasional plastic-sweet plume of opium wafting over brick walls. I don’t remember the smell of detergents, cleansers, shampoos and creams. In fact, the only artificial smells I recall came from the occasional American product that seemed wildly exotic at the time: watermelon lip gloss, strawberry shampoo and Love’s Baby Soft. Otherwise, my world was defined by everyday things: the pages of a fresh notebook, fountain pen ink and pencil wood. Perhaps this helped develop a more subtle and sensitive nose that despite the strong smells of the city, did not feel the urgency to mask or perfume them.

By constantly having synthetically perfumed products around us we may be overloading our sense of smell to such an extent that it might lead us towards olfactory breakdown. Who really knows what all of these aroma chemicals are capable of doing to our odor receptors. They do cause temporary olfactory fatigue so that we are no longer able to smell the more subtle aromas around us. Now that aromachemicals can be found in countless products the world just doesn’t seem to smell as good as it once did, at least not to me.

Posted by Maggie Mahboubian at 12:39 AM

great artical Maggie! i particularly liked the image of the "olfactory billboards having to scream over the others"!
Modern perfumery has become more of an olfactory assault than a pleasure....
and I also like the idea of it all trying to recreate a natural world people are no longer in touch with...a response to actual olfactory sensual deprivation indeed!

Hi Maggie,
I wish I could write like you.
An excellent view of the reasons why consumers should return to the origin of perfumes! Our societies are aggressed with strong scents nowadays...

Hi Maggie,
Great article! I completely agree that people in this society are bombarded with so many strong and unnatural scents everywhere that they can't enjoy real perfume or natural smells.

Ambrosia,
That artificial world is all around us. Media is the culprit. How many car commercials do we have to endure trying to convince us that we'll return to nature if we drive their machines, or find our true identity. Or the food industry trying to get us to jump onto their latest bandwagon (low fat, low cholesterol, etc.) instead of encouraging us to eat REAL food, the kind our bodies are evolved to eat. Media invents a simulacra and before you know it, it becomes our reality.

Doc Elly,
It does take time to appreciate naturals, but once you do, it's really hard to go back to conventional or commercial perfumes!

Isabelle,
Thank you for your kind words!

This is so nice!! Are you coming back and start posting about this subject again? Great job!!