A question came up recently about the discussion of perfume as a process rather than as a finished product. The consensus was that as perfumers, it was more relevant to talk about process than about the finished product. Some felt that a finished perfume did not need further discussion, unless one was to critique a scent. Others pointed out that many perfumers never felt finished with their work; they were constantly tweaking and experimenting with their perfumes even after they had been completed. This got me thinking about the issue of product versus process in the creation of perfume as well as in that of architecture. I wondered how the two disciplines could engage in a dialogue about this issue and how each could inform the other. 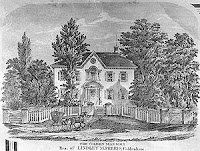 While a building could be considered a finished product, it is, in fact a constantly evolving “work in progress”, one that begins with a concept that is developed through a complex design process. The result is a set of drawings (a simulacrum) that describe the building analytically as a three dimensional entity. During construction further changes take place that form a part of this dynamic process. After a building is inhabited, it comes to life and is transformed by its inhabitants (Colden Mansion in 1859). Finally, after a building has been abandoned, it changes further as it decays. The life-cycle of a building is characterized by entropy. (Colden Mansion today) 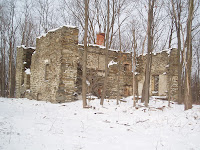 If a building can be viewed as a dynamic entity that is constantly changing, can we ever view it as a product? At the inception of a project a conceptual design is presented for approval before the design of a building is developed any further. These schematic design packages necessitate hours of preparation to form a coherent “product”. Fast forward to when a building has been completed and in the pages of a magazine. The photographs that are taken are generally of spaces that have been styled to create an ideal image. Rarely does one see a photograph of a space that has been taken spontaneously. Furthermore, these photographs are selected for their composition, color and other formal elements.

Architects work towards a constantly evolving product through process. There are some, who are engaged and stimulated by the process of design, and certainly there are design tools (imaging software) that allow a conceptual design to appear as real as an actual structure, but in general, the work of architecture tends to center around the production of the object. Process is a means to an end, not an end in and of itself. 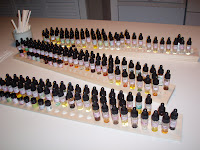 Perfumery is similar to architecture in that an idea or concept generates the process of creation and it takes months, sometime years to develop a perfume. The difference is that while a building is designed through representation, the design of a perfume is done using the materials that actually make up the perfume itself. Process is product in perfumery. Perhaps that is why perfumers prefer to talk about making their perfumes. The process of creation is the creation itself. While the architectural object is dynamic and changeable, the object of perfumery – a finished perfume - is static. That which is dynamic in perfumery is its creation. This is not to be confused with the dynamic nature of a perfume once it is applied and the rates of dry down that create layers of changing scent. The static nature of a completed perfume has to do with the immutability of the finished blend, not a drop more being added or subtracted, it is balanced and still.
Posted by Maggie Mahboubian at 8:13 PM

I so wish more folks would read this post of yours !

We are so bombarded with fake scents everywhere that even I (who is in my 40's and had never had an allergy or anything) have developed in these last 6 months or so a strong sensitivity to so many of the fake scents out there.
I have to be very careful when I go in public.
I have to watch where I sit and make sure I am not too close to someone who is wearing scented deodorant or some fake perfume.
I even have to be careful about walking into empty rooms !
I walked into an empty bathroom a few months ago and out of nowhere the automatic "air freshener" went off and I had to run out of the bathroom. Even getting out of there quickly was not enough as it got on ME and in my hair...
I had a headache and difficulty breathing for a few hours until I could air out.
It is getting to be unsafe to be out in public these days :(

Any idea what may have brought this on? I run out of public restrooms as well, but because air fresheners make me gag. It would be a different matter if it affected my breathing! Wow.

My Mom has always had "allergies" and certain flowers... bothered her, but for me it isn't the real thing that gets me - it is the clinging fake stuff so I really wonder if it isn't the same with my Mom and she doesn't realize it ???

I also have a connective tissue disorder that killed my brother when he was just 30. I and my kids have o=it as well, but it does not appear to be the deadly form in us - we'll see.
It affects the linings of heart, lungs, muscles... and I think my lungs are just weakened now and that's why it is really bothering me.

I sure my post makes sense - I am on my way out the door, but wanted to answer before I forgot.