Marcel Duchamp’s readymade piece entitled “Belle Haleine” remains humorously enigmatic, a layered cultural critique that allows for multiple readings.  Elements of the absurd, irony and visual puns run rampant in this piece.  It is a puzzle and a puzzlement executed with the deft moves of a master chess player.  Much has been written about this piece in an attempt to parse the words of its author, Rrose Selavy, Duchamp’s alter ego, but nothing from the point of view of the “perfume” itself.

The original version of Belle Haleine was created in 1921, six years after Duchamp arrived in the United States and settled in New York. Duchamp used a perfume bottle and box made by Rigaud for a perfume named “Un Air Embaumé” that was launched in 1915, the same year Duchamp left Paris.  “Un Air Embaumé” means “A Perfumed Air”, but the word embaumé could also be read as “An Embalmed Air”.  In French, the letter “R” is pronounced “air”, so the Rigaud perfume could also be read as “Un R Embaumé”, a reference to the house whose embossed letter remained on the gold label Duchamp reworked.

Given the “cryptic” nature of this word play and seeing that the Rigaud perfume bottle was housed in a coffin-shaped box which Duchamp lined with satin, perhaps the intention was, in part, to point out a connection between perfume and death through the ancient use of aromatics as embalming materials.  Alternatively, Duchamp may have critiqued the bourgeois practice of housing art in museums that seemed more like morgues than places for living work. 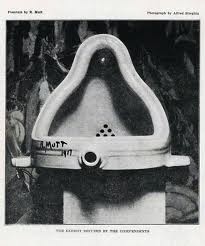 Like the R. Mutt Fountain of 1917 (another pseudonym that features an R), it was revolutionary to create art from a throw-away object created for mass consumption.  As with perfume, this art was similarly disposable and ephemeral. 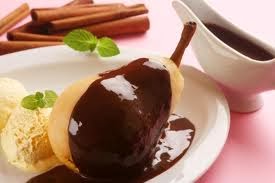 Rigaud’s “Un Air Embaumé” is referenced by the name Duchamp ascribed to his perfume, “Belle Haleine” meaning lovely breath (a perfumed air, even) and a play on words with “Belle Helene”, the dessert.  Since the bottle was presented without perfume, perhaps it was meant only to contain the perfumed/embalmed air of one’s breath, as ironically lovely as the pear dessert itself, or as deathly stern as the old-fashioned cameo portrait of Rrose Sélavy on its label. 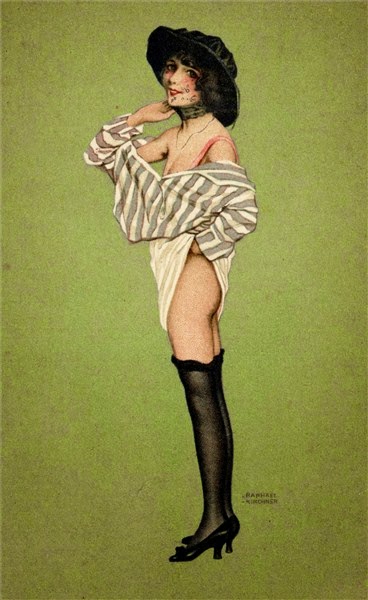 Perhaps donning a small veil was a way to mask foul breath?  An obvious wordplay on Eau de Toilette  (traditionally used for personal care and even oral hygiene), another veil of meaning is revealed when “Eau de” is read as “Ode”, an ode to the small veil which distances the wearer from others.

Clearly poking fun at Rigaud’s maudlin advertising imagery, Duchamp was telling a visual “rigole” or inside joke by punning on the perfume, its contents, its brand and the people who would wear or “consume” it.

Belle Haleine was created by the house of RS (obviously standing for Rrose Sélavy).  But the R is printed backwards which almost resembles an A if you squint and if you sound out the RS you get “Arse”.  Furthermore, the label is shaded so that it resembles a bloated form.  “Belle Haleine”, when spoken quickly turns into Baleine or whale, the source of ambergris and “Voilette” sounds like violette, favorite scents of the old fashioned, puffed up, self-important, New York society ladies.  To reinforce this connection, the borders of the label resemble the cross-section of a whale cutting through its blubber.  The original Beaux Arts style label by Rigaud sits politely inside its embossed glass fronds, but Duchamp’s label crudely pushes itself out, a perfume bottle within a perfume bottle.  The focus is the image of Rrose Sélavy revealing masculine features, especially an Adam’s apple that is highlighted by the camera’s black and white chiaroscuro and a pearl choker.

Duchamp used the Rrose Sélavy pseudonym in other instances and had different portraits taken by Man Ray, perhaps intending to develop this persona. So much has been written about his use of the double R in Rrose which he first used to sign a cryptic pun published in Francis Picabia’s Dada magazine 391.  Perhaps the embossed label on the perfume box offers a clue since it retains the capital “R” of the Rigaud emblem.  For one, rose is practically synonymous with perfume.  Could this extra letter be the perfumed/embalmed R?  R. rose Selavy?  Air-rose Selavy?  Eros, c’est la vie?  Rrrrrrrose, c’est la vie (warbled like Edith Piaff)?  The original Rigaud bottle was painted a rose pink which Duchamp changed to green.  Too bad for Rigaud, that’s life. 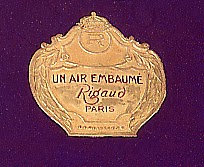 By 1921 Rigaud had already branched out to New York, but continued to list Paris on their labels since it was the place where their perfumes were made.  Duchamp, however, printed both cities on his Belle Haleine label, alluding to his own connections as well as to the new economics of exchange. 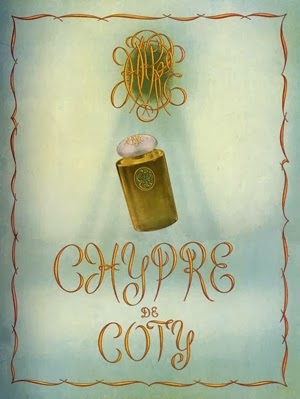 The American public was probably quite familiar with Rigaud, a brand that competed with Coty who took America by storm only a decade earlier.  Rigaud’s sentimental (no pun intended) marketing must have seemed outdated to the flapper generation hungry for a modern, avant garde approach in all areas of society. 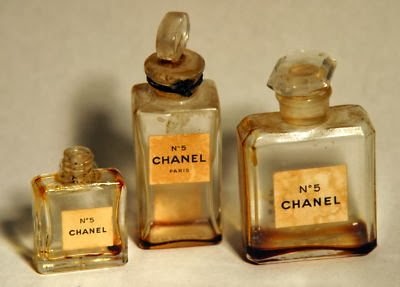 This was the opportunity Coco Chanel seized when she created her abstract floral No. 5 in 1921. 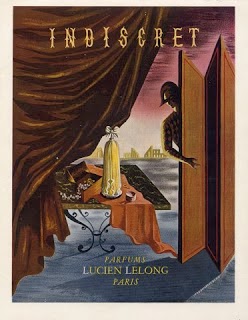 Lucien Lelong was the first perfume house to co-opt surrealist imagery in its marketing campaigns, borrowing from Andre Breton, Magritte and de Chirico.  Duchamp was aware of this avant garde environment in Paris as compared to the backwards looking society of New York. 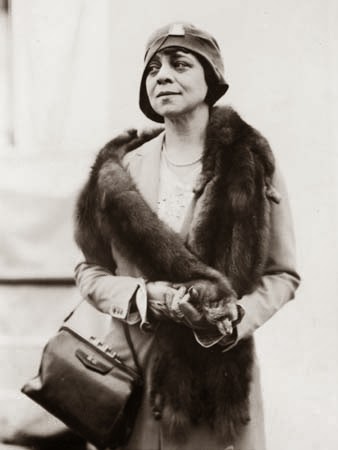 There are several articles written about an alternative reading of Belle Haleine as being connected to Belle Greene, a Manhattan socialite and JP Morgan librarian who offered Duchamp his first job in the United States, only to fire him unceremoniously six weeks later.  Certainly, the name and color of the perfume bottle are persuasive arguments, but I wonder if Duchamp was so petty as to immortalize this relatively minor affront six years later, unless it was emblematic of a putrid society, the smell of which he intended to reveal, one that was in need of a breath of fresh air.  In addition, the completed Belle Haleine project was presented in 1965, well after Belle Greene died in 1950.

Duchamp’s Belle Haleine perfume bottle contained only air, but as a perfumer I can’t help but wonder what fragrance he would have created to complement this project?  What would it have smelled like?  What notes would it have included? The open ended nature of Duchamp’s work makes it tempting for a perfumer to interpret a fragrance for Belle Haleine. But then again, one would have to live up to the ironic brilliance of the piece.  Anything less would be a rigole.

*Lucy Raubertas of Indieperfumes wrote with elegant prose about Duchamp's Belle Haleine in her 2006 blog post,The Secret of Scent by Luca Turin, Perfume and Art where she mused about Art, Perfume and the loss of Beauty.

*Review of Belle Haleine 2011 exhibit at the Neue Nationalgalerie in Berlin by Hal Foster, "A Rrose in Berlin", Artforum, April 2011.


ADDENDUM:
I was able to smell a recreation of “Un Air Embaumé” at a presentation by Christophe Laudamiel of historical perfumes from the Osmotheque collection hosted by the Institute for Art and Olfaction on January 22, 2014.  Although Laudamiel did not present this particular fragrance in his talk, focusing instead on key historical perfumes, it was curious that it was even included in the kit assembled by the Osmotheque, since it is relatively obscure.  Like several perfumes popular at the time such as Jicky, Emeraude and l’Heure Bleue, Un Air Embaume, has a strong violet note.  However, it also has an herbal accord that gives it a medicinal quality reminiscent of violet breath fresheners.  Could Duchamp have been perfume savvy enough to have zero’ed in on a fragrance that not only provided a ripe opportunity for a visual pun, but one that included the olfactory dimension?  The clues certainly point in that direction.

Posted by Maggie Mahboubian at 6:03 AM

I am totally taken in by your meditation on Belle Haleine. We have much to talk about!