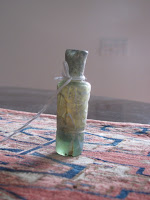 A perfume cannot exist without its container. Perfume bottles have been around for millenia, intriguing us with their essences. The perfumes themselves may have evaporated, but the forms linger and speak for the vanished contents. These ancient vessels are still as relevant today as they were when they were first created. The perfume bottle has indeed transcended time. 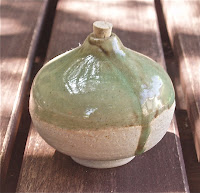 In order to understand how the perfume bottle has remained timeless I thought I would make one. There were several functional requirements that would have to be met. The bottle would have to be non-porous and protect the fragile essences from sunlight and oxidation, be non-reactive against the corrosive action of the volatile oils/alcohol and be proportioned to contain the precious liquid, about 1/2 ounce. There would also have to be a small opening so that the perfume could be applied without spilling and the orifice closure would have to prevent evaporation.
The natural materials available ended up being limited to glass, stone, glazed ceramic or stainless steel, the same materials one would use to cook acidic foods. Glass would have to be blown, cast or ground. Stone would have to be chiseled or ground. Steel would have to be forged. 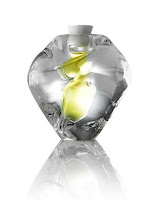 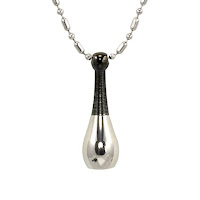 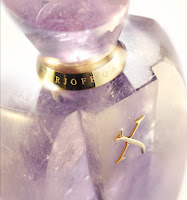 Ceramic would have to be formed and glazed. An unglazed terracotta pendent, however, could be the ideal vehicle for wearing a natural perfume as it would hold onto the volatile notes and diffuse them slowly. But that’s the subject of a different exploration . . . Of all the methods, the one that afforded the most plasticity and availability was ceramics. Since I had taken a ceramics class (two years ago), I decided to practice throwing in miniature.

The forms that resulted were limited by my technical ability, but yielded a surprising variety of shapes. Perhaps unconsciously influenced by the work of Jonathan Adler 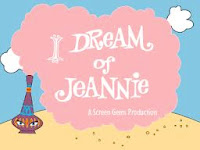 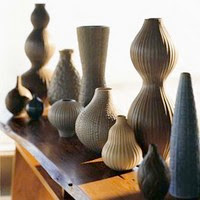 or the generic genie bottle each flagon took on a different shape, all under two inches high. 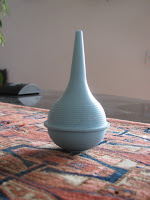 There is an amusing similarity between one of the bottles and the bulb extractor given to me at the hospital last November after my daughter was born. Hmmm, I wonder if those bulb extractors could hold perfume . . . 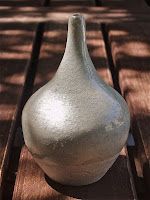 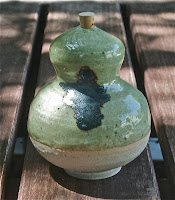 Aside from the formal study, other basic issues such as materiality and decoration were explored. Since I was not proficient enough to use porcelain, a material better suited to such small scale work, I chose a clay body with a fine grit which I highlighted by leaving a portion of the exterior unglazed. The bottle interior, however, had to be glazed and non-porous. Depending on how the pieces were dipped, the interior glaze sometimes overlapped the exterior glaze and resulted in some unexpected results and flaws. This contrast between glazed and unglazed surfaces was the only decorative element used. 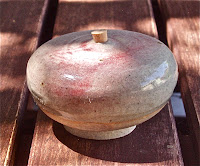 Another challenge was to pull the bottle walls thin enough without compromising their structural integrity. This would help reduce material weight and ensure the bottles were proportional. The top had to be finished so that a cork stopper would fit properly. Cork was chosen because of its traditional use in perfumery and availability. In order to figure out volume, each bottle had to be filled with water before measuring out the perfume. No other identifying details such as labels or tags were used except for a signet ring imprint (did ancient perfumes have labels?). Finally, the bottles were not created with a particular perfume in mind, but were the end result of an exploration of perfume containment as a concept and analogous to study models or sketches used architecturally to analyze an idea. 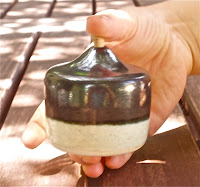 My handmade ceramic perfume bottles work well and have an appeal that is almost toylike. They are reminiscent of the miniature Chinese ceramic jugs shown below that are almost 2,000 years old. As much as I enjoyed this experiment, the modern day exigencies of perfume selling would make my ceramic bottles highly impractical. Although form follows fragrance, there are practical considerations that have to be met. I will have to revisit this topic in the near future when I am ready to launch my first perfume. 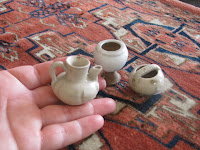 Posted by Maggie Mahboubian at 1:34 PM

What a fun project! I think the idea of a terracotta pendant to diffuse perfume is a fantastic idea, and a practical one. I'll have to try it. At one point I did have a terracotta diffuser designed for room scenting, but it seems to have disappeared.

Finding the "right" perfume bottle is a real challenge, so making your own is not such a far-fetched idea if you have the skill and resources to do it.

Thanks, Doc Elly! Definitely try the terracotta diffuser. It would be easy to make using unglazed porcelain. I'd love to get back to the studio and throw some more mini bottles. I think I would explore surface design now that I have form making under my belt. Glass is better suited to perfumes, so you can see the lovely colors, but blowing glass seems daunting to me.

What a lovely post - I love your ceramic bottles!

There's something so appealing and 'right' about perfume containers that are either hand made or recycled.

Blowing glass does indeed seem daunting! I wonder if moulded glass is any less daunting. Have you seen Pacific Perfumes containers? They do lovely things with wood, which are if not exactly handmade, are at least produced on a cottage scale. I can't wait for you to revisit this topic!

Hi Johanna,
I saw Pacific Perfume's container/packaging at the HBA Expo in NY last month and LOVED it! I'm so excited they won the award in their category. Such an important step in building awareness for natural perfumes. You're right, handmade perfumes should be housed in handmade containers. OK, time to wrap our heads around this one.

Great post Maggie. I am still trying to figure out the perfect handmade container too. I love the thought you put into this.

Maggie, this really is a timely and lovely thing you've shared with us.
I'm enthralled you can throw miniatures!
Yes, the quest for the perfect container continues here too, where in Australia, our choices are even more limited.

Thanks Elise and Margi. I liked the bottles you posted on your blog (I believe you sponsered a group buy), Elise. Simple and elegant. I admit I've been thinking a lot about the bottle issue, but perhaps I need to remind myself that what counts is the content.

Hi, Maggie, great post. Yes, the combination of natural clay containers and natural perfumes is a winning concept. Your miniature pots are adorable. I'm a potter, too, and love working in this medium. When you put it together, let me know so I can buy one. Love Lyn